Energy and Notion project tells the story of changing energy in Wales through the affected communities.

Coal had a massive influence in Wales’ development from the 19th Century. Energy continues to have a profound effect upon the physical and social landscape in Wales.

The Energy+Notion project was funded by Arts Council Wales and Vatennfall in 2016.

The imagery was featured in The Guardian – see article here 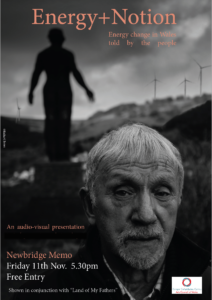 Flyer from the Installation – above.  The flyer features a friend that I made during the project’s development, Owen Tucker.  Owen was one of the first on the scene during the Six Bells disaster of 1960 that killed 45. Sadly Owen died last year 2019.

The Energy+Notion project was supported by curators at arts centres, cinemas and theatres across Wales, that included:

The project engaged with primary schools, youth and community groups, including:

A small production grant was provided by the Arts Council of Wales, 2016.

The project was produced & photographed and edited by Richard Jones.