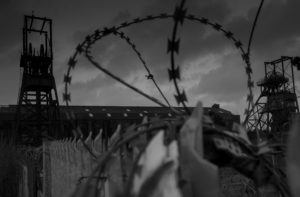 Penalta Colliery, near Nelson, South Wales, 01-Feb-2016. The derelict mine is one of less than half a dozen coal building that remain in Wales from more than 600 collieries that employed clave to a quarter of a million.
Open cast coal mining on the edge of the South Wales coalfield at Ffoss-y-Fran near Merthy April 2016. The open cast mine is operated by Miller Argent is threatened with closure. Most of the coal goes to the Aberthaw Power station but due to EU emission initiatives that may soon stop, as the coal is deemed too high in nitrous oxide. The Uk has committed to end power generation by coal by 2025.
Jama Hersi, (right) 82, and Ada Ibrahim, 82, Somali’s who came to Wales working on the coal ships delivering Welsh coal around the UK, 29 April 2016 . Both live in Bute Town, in the centre of Wales’s Somali community, most of whom came here working on the coal ships.
Photo by Richard Jones

This site uses Akismet to reduce spam. Learn how your comment data is processed.

English
I use cookies....If you continue, I'll assume you are happy with that....thanksOk